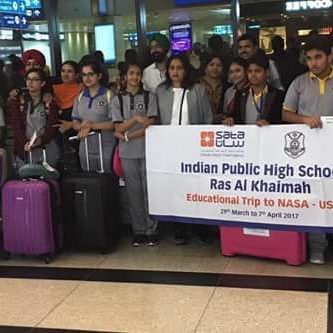 On 29th March 2017, a group of 12 students guided by Dr. Annamma Mathew, Vice Principal arrived at JFK airport, New York as part of the educational trip to NASA organized by SATA, Sharjah. During this ten days trip, the students spent three days in NASA’s Kennedy Space Center in Florida extending their knowledge on space in a fun and creative way. On the first day, students built a truss, and then simulated a spacewalk. To add their knowledge, students learned about astronauts, their life in space shuttle, and the space mission. The next day, they built and launched model rockets made of paper tubes and PVC pipes. Then, the students used simulators to understand space travel and space shuttle. The final day, they were engaged in building parachutes for the task known as ‘egg landing’. They also had face to face talk with the astronaut, Bob Springer, who motivated the students with his wonderful experience with the space missions. In addition to this, Students enjoyed shopping from the largest space shop in the world, and they were thrilled to visit some of the amazing locations in the world: Disneyland, Liberty Island, White House, Trump Tower, United Nations Building, Abraham Lincoln’s Memorial, Ground Zero and so on. In short, this trip helped the students to identify challenges and proposing solutions to actual space related situations, and they gained experience in Science, Technology, Engineering and Math. The students were finally back home on 7th April 2017.

Indian Public High School is truly an extraordinary place of learning. Our talented staff provides each student with a rigorous standards, high academic.

©️2021 Indian Public School. Made with ❤️ by Cynapto